After much speculation, Steve Jobs, CEO Apple announced the launch of the iPhone during his keynote address at MacWorld Conference & Expo in San Francisco. 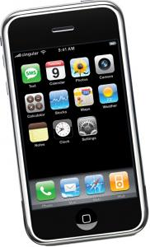 iPhone combines three products — a revolutionary mobile phone, a widescreen iPod with touch controls, and a breakthrough Internet communications device with desktop-class email, web browsing, maps, and searching — into one small and lightweight handheld device. iPhone also introduces an entirely new user interface based on a large multi-touch display and pioneering new software, letting you control everything with just your fingers. So it ushers in an era of software power and sophistication never before seen in a mobile device, completely redefining what you can do on a mobile phone.

Jobs also announced that after 30 years in the computer industry, Apple Computer would be dropping the word “computer” from its name. The company will now be called Apple Inc.

Engadget has some great photos from the launch.